Welcome to part five of our month-long data demystified series. As part of Data Literacy Month, this series will clarify key concepts from the world of data, answer the questions you may be too afraid to ask and have fun along the way. If you want to start at the beginning, read our first entry in the series: What is a Dataset? 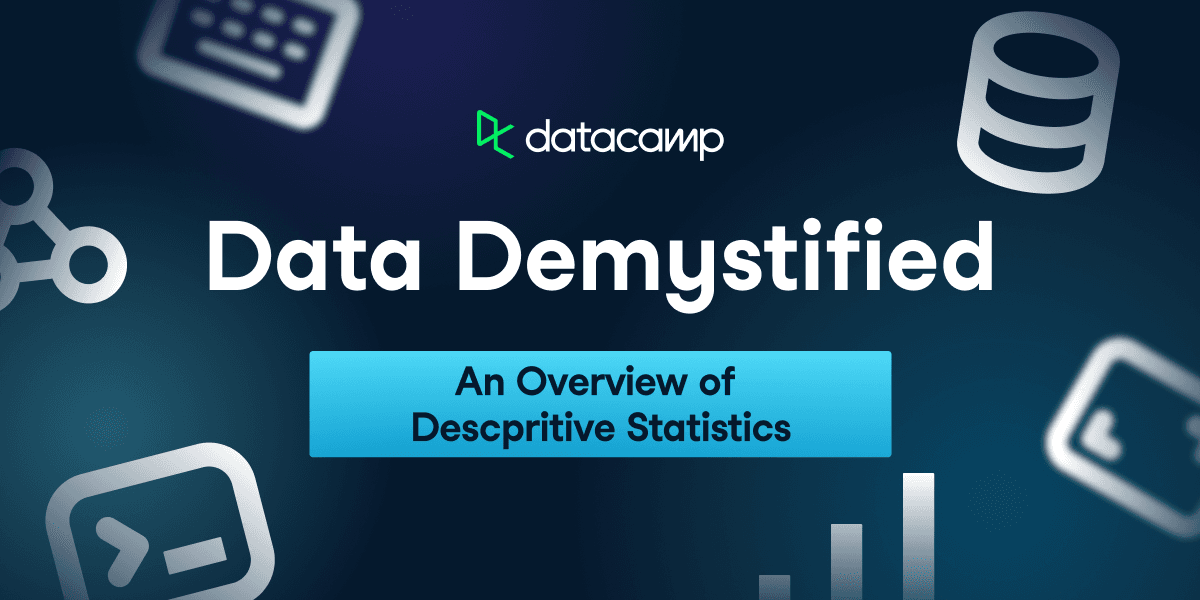 In this entry, we’ll dive deep into descriptive statistics, one of the fundamental areas of data science.

What is descriptive statistics?

In the next sections, we’ll outline the main techniques in descriptive statistics, all taken from our introduction to statistics course.

When you have categorical variables—that is, data that consists of discrete groups like hair color—the most natural ways to summarize those variables are by counting them or talking about proportions.

Measures of center, more popularly known as averages, summarize your data by capturing one value that describes the center of its distribution. Here are the most common measures of center.

The formula to calculate it is to add up all the values, then divide by how many values you have. For example, suppose you have a variable capturing the height of 10 people. To calculate the average, you need to sum up all their heights and divide them by 10.

One of the strengths (and a weakness, as we'll see in a moment) of the mean is that every data point is used in the calculation. That is, it uses the most information possible in its calculation.

There are other types of mean, known as the geometric mean and harmonic mean, which have more niche use cases.

The median is calculated by sorting the values from smallest to lowest, then taking the middle value.

Using the height example, you need to sort the height from lowest to highest and choose the midway point in your height variable. Which, in this case, would be the fifth value. The median is known as a "robust" descriptive statistic since it won't change much if one of the values changes.

To illustrate this, suppose we had received another data point of someone extraordinarily tall or short. The arithmetic mean of these heights would change quite a lot since outliers can influence the final value for the arithmetic mean. The median, however, would only vary slightly since the midway position hasn’t changed much.

Other measures of location

Sometimes a middle value isn't a helpful summary of your variable. Perhaps you care about the minimum (smallest value) or the maximum (largest value). These other measures of the size of the values are called measures of location.

A variation on percentiles is quartiles, where you split the data into four intervals rather than 100.

Sometimes, rather than caring about the size of values, you care about how different they are. Descriptive statistics that calculate how different values are called measures of spread, or measures of variation.

The variance is a more technical measure of spread often used in conjunction with the arithmetic mean. It is calculated as the sum of the squares of the differences between each value and the mean, all divided by one less than the number of data points.

To illustrate this, let’s look at an even simpler example of the height variable. Assume that we have captured four people's heights, as listed in the table below.

The arithmetic mean of people’s height here amounts to 172.5 cm (calculated by summing up all their heights and dividing by 4).

In this example, the variance would be

As with the mean, the fact that it uses every data point in the calculation makes it very powerful and potentially subject to larger changes when the data changes.

Correlation is a measure of the linear relationship between two variables. That is when one variable goes up, does the other thing go up or down? Several algorithms calculate correlation, but it is always a score between minus one and one.

For two variables, X and Y, the correlation has the following interpretation.

Note that correlation does not account for non-linear effects, so if X and Y do not have a straight-line relationship, the correlation score may not be meaningful.

We hope you enjoyed this short introduction to descriptive statistics. In the next series entry, we’ll explore correlation more deeply. Specifically, we’ll be looking at where the idiom correlation does not imply causation comes from and how you can avoid this pitfall.

Beginner
4 hours
21,221
Learn the fundamentals of statistics, including measures of center and spread, probability distributions, and hypothesis testing with no coding involved!
See Details
Start Course
See all courses
Related