Welcome to the second part of our month-long data demystified series. As part of Data Literacy Month, this series will clarify key concepts from the world of data, answer the questions you may be too afraid to ask, and have fun along the way. If you want to start at the beginning, read our first entry in the series: What is a Dataset? 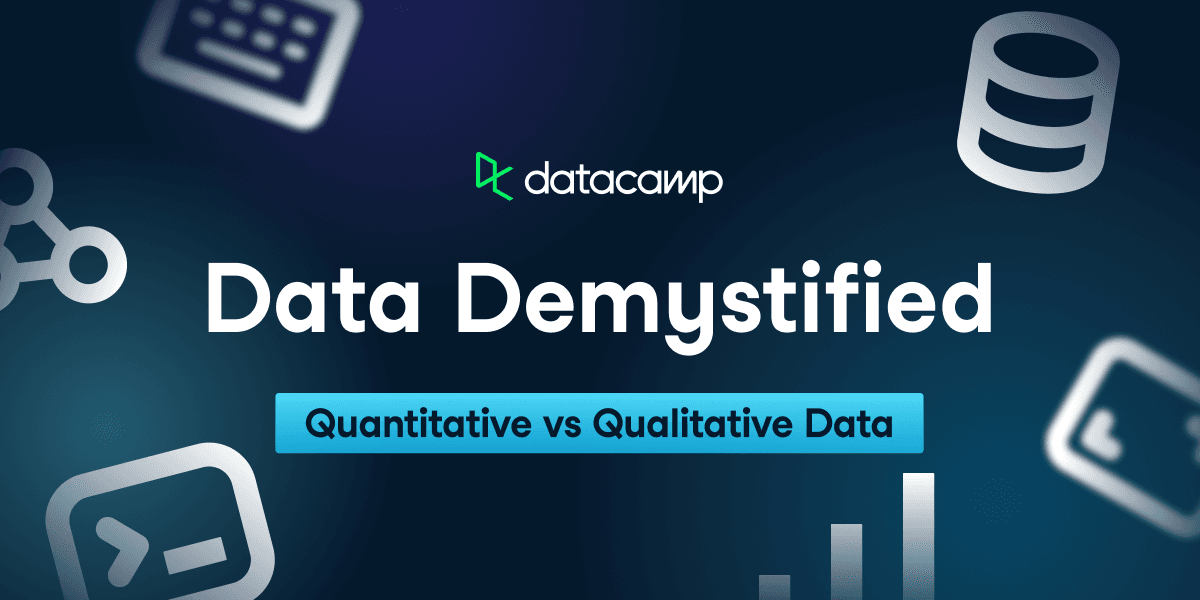 In this entry, we’ll be exploring the different types of data, examples of them being used in action, and how you can get started with them.

The Two Types of Data

Understanding what data you have is essential to determining the best approach for analyzing and interpreting it. A common way of categorizing data is to divide it into quantitative and qualitative data.

You will likely encounter both quantitative and qualitative data when working on various data tasks. The following sections provide examples of how you may interact with both data types in the same task.

Suppose you are a marketing analyst. Your company is running a new social media campaign and wants you to analyze the performance of some existing video assets to get data-driven inspiration for what content your colleagues should create.

You may want first to consider quantitative data about the video to analyze. This includes:

Each of these data points is a number. The length of the video is a measurement in seconds. The clickthrough rate is a percentage. The other pieces of data are whole numbers because they are counts.

The video's topic, aesthetic, and production values are challenging to quantify as numbers. They are much easier to describe in words. For example, "the video was about learning data science; it used a vaporwave aesthetic; it had an upbeat tone."

Notice that there is often some subjectivity in deciding on qualitative values. Two people watching the video may disagree about whether the tone was happy or not, and this is why having clear guidelines for qualitative data collection is essential.

The video's script is interesting because while it is also qualitative data, since it consists of words rather than numbers, it differs from the other pieces of qualitative data in two ways.

Survey data is another case where you often see examples of quantitative and qualitative data together. Fast-forward a few months from the previous example. After hearing all the exciting insights from your analysis of existing videos, your company made a new video for its social media campaign. Before its launch, they selected people to watch the video and sent them a survey to get feedback on it. You have been given the task of analyzing the survey results.

One of the questions in the survey is "How many times did you watch the video?". This is a quantitative piece of data since the answer is a number.

Another question is, "What was your favorite part of the video?" This is a qualitative piece of data since the answer is words.

A third question is, "How would you rate the video, from one to five stars?". This is quantitative data because the answer is a number, though it differs slightly from the other examples we've discussed. Since the rating is an opinion, the value is subjective.

Another example of a data task where you encounter both qualitative and quantitative data is user interviews and focus groups.

For example, let’s assume you’d like to get some feedback on your product. You decide to run a focus group, where you interview several users and ask them for feedback. The brief you are given is to interview users who have been using your service for more than a year and have been regularly active but aren't considered power users.

To select the participants, you use quantitative analysis. That is, you look at numeric metrics such as:

During the focus group session, you ask many questions, and the users have a discussion. It's difficult to quantify what they are talking about since the conversation flows freely. However, you can pull out quotes about what the participants think is important for your product. These quotes are qualitative data, since they describe the participant's thoughts but don't involve numbers.

You also run some polls during the focus group, asking participants to vote on which forthcoming features they think are most important. The results of these polls are quantitative data since the ranks of the features are numeric.

We hope you enjoyed this short introduction to data types. In the next entry of data demystified, we’ll be looking to unpack the different elements of data work and outline the difference between common terms such as data science, machine learning, deep learning, and artificial intelligence. If you want to get started on your data learning journey today, check out the following resources.